A twelve year old cutting horse injured his left hind leg at a cutting competition, when he got down in the stall and kicked through the wooden wall, trapping his hind leg. The trainer, Casey Moore of Casey Moore Cutting Horses in Morriston, Florida had to break the boards to free his leg. He had numerous cuts and abrasions on his leg from above his hock to his hoof, but the majority of the damage was done to his pastern and coronary band. Dr. Holly Samko of Blitchton Animal Hospital who was attending the cutting, was called to treat the horse. The initial assessment showed a lot of swelling and bruising in the ankle and pastern area and a 1 1/2-2 inch cut on the coronary band. The lower leg was quite painful to palpation. Dr. Samko cleaned and bandaged the leg and the horse was taken to the University of Florida for additional treatment. X-rays revealed no broken bones, and the area was debrided further, treated and bandaged. The horse was put on a treatment course of anti-inflammatories and antibiotics, monitored for a couple days and sent back to the trainer. At that time, the owner and trainer felt that even barring any complications, they would still lose several weeks before the horse was going to be able to compete again. This inability to compete would jeopardize the horse’s top 15 ranking within the world standings. The decision was made to contact The Sanctuary to see if there were any additional treatments that would speed up the healing process and hopefully prevent any further complications.

The horse arrived on 6/21/10. The veterinarian prescribed Hyperbaric Oxygen Therapy and Cold Salt Water Leg Spa treatments to help reduce the edema, and increase oxygen to the area to speed repair of the damaged tissue and help prevent the wounds from getting infected The horse received hyperbaric oxygen therapy on the first and third day of his stay, and was treated in the cold salt water leg spa daily. Swimming was the prescribed exercise to keep his muscle strength and cardiovascular fitness level up, while not putting any concussion on his injured leg. 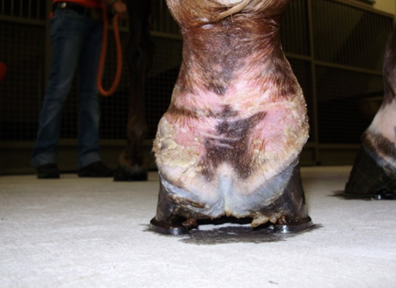 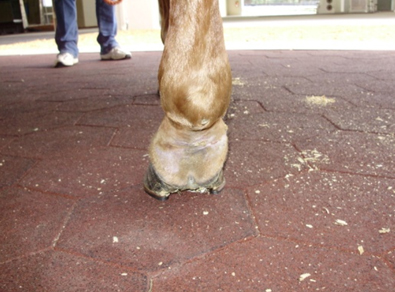 The photos show marked improvement of the injured area in an eight day period.

The horse returned to the trainer after eight days at The Sanctuary, ready to compete again. He was shown three days later at the Sunshine State Summer Series Cutting over the July 4th weekend, winning 2 of the 3 open cutting classes offered. Trainer Casey Moore stated, “We only missed one cutting, if it wasn’t for The Sanctuary getting him back into competition so quickly, we would not have been able to maintain our top 15 ranking, The Sanctuary worked miracles”.

Thanks to Casey and Sheri Moore, Casey Moore Cutting Horses and Les Ammons, the horse’s owner for allowing us to present this case study.