“Coon” a two year old black Labrador retriever, owned by David Richards and Olympian Debi Connor of DC Sales, was brought to the Equine Performance Center on May 4, 2009 for laser therapy on an abscessed wound. Coon had been bitten by a snake, species unknown, on the back of his right hind limb.

The owner discovered the injury on Friday morning May 1, 2009. Coon’s leg was swollen 5‐6 times its normal size and was non weight bearing. Coon was taken immediately to the veterinarian but a definitive diagnosis was not attainable. Radiographs showed no fractures. Ligament damage or a snake bite was suggested as a possibility. The veterinarian prescribed an antibiotic and an analgesic along with limited activity. Seventy‐two hours later the wound abscessed and began draining excessively. 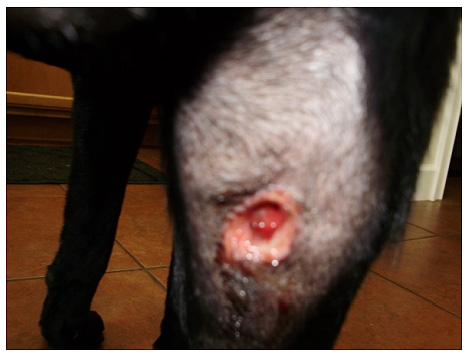 Within a few hours the swelling had noticeably diminished and the wound was visible (see fig 1). Coon was taken back to the veterinarian, who upon examination felt that a snake bite was the probable cause. The veterinarian continued the course of antibiotics and Coon was kept inside from May 2‐ May 12. The owners utilize our therapy and rehabilitation services on many of their horses’ soft tissue, ligament, and wound injuries, which lead them to consult with the Equine Performance Center on treating Coon with laser therapy. The laser treatments started on May 4 and he received 6 treatments overall. Treatments were administered on May 4, 6, 8, 12, 15, and May 18. The wound was completely closed on May 22 with no permanent damage or scarring and Coon successfully returned to normal activity. 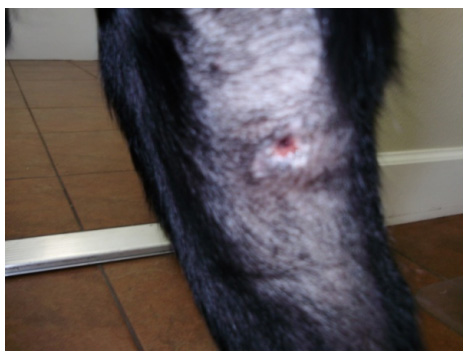 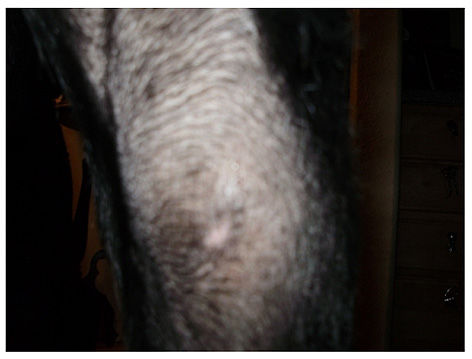