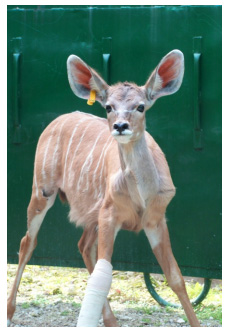 A 5 month old Kudu, a type of African antelope, presented with a wound on the right front leg. The kudu was injured on November 29, 2008 by sticking his leg through a fence exposing bone and tendons. The kudu was put on antibiotics and the wound was treated with a topical colloidal silver gel and bandaged. After two weeks the wound was not healing as hoped for, and a decision needed to be made whether to put the animal down or find a more aggressive treatment. Dr. Robert Barber, DVM P.A., attending veterinarian for The Micanopy Zoological Preserve owned by Jerry Holly, suggested hyperbaric oxygen treatments to speed up the healing process.

Dr. Barber and JerryHolly, in conjunction with The Sanctuary, developed a treatment protocol that consisted of five hyperbaric treatments within seven days, along with continued antibiotics and bandaging.

After each hyperbaric treatment, there was a noticeable improvement of the wound. As of January 4, 2009 the kudu’s wound was almost completely healed and he was able to be released back into the preserve. 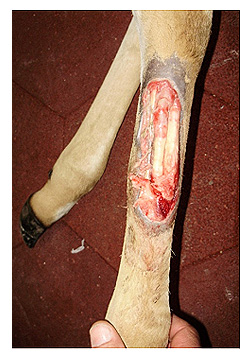 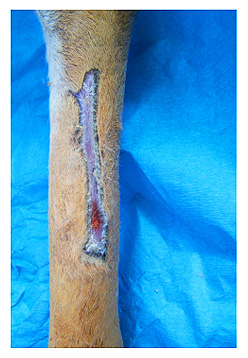 Photo taken 1/4/09 before kudu was released back onto the preserve.
**Photo courtesy of Burrell Davidson, Micanopy Zoological Preserve