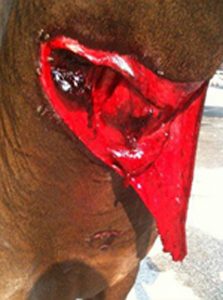 History: Canaan Land is a 12 year old thoroughbred gelding, who is a Final Furlong graduate that now works as a pony horse for Niall Brennan Stables. On September 16, 2011, Canaan Land was in a fight with another horse in a paddock and broke a fence board, presumably with his neck. There was a 12” by 12” V-shaped laceration starting just left of the mid-line of mid-neck, extending laterally to the right side over the jugular groove. It was a full thickness laceration with a partially transected brachiocephalicus muscle belly. The trachea was partially exposed but no important structures were involved. 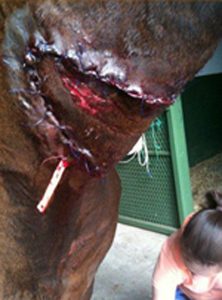 Treatment: Dr. Katie Rubin, an affiliate of Dr. Bonenclark and Dr. McLellan at Florida Equine Veterinary Associates, was called to treat the wound. The flap was sutured closed and a Penrose drain was inserted. At the time of the incident, Canaan Land received Phenylbutazone IV (2mg), Tetanus Toxoid vaccine, Gentamicin IV (35ml) and Procaine Penicillin G IM (30ml). He received Procaine Penicillin G, Gentamicin and Phenylbutazone for 4 days then switched to oral Bactrim for another 7 days. The drain was pulled after one week. Canaan Land was on stall rest for the first 2 weeks with hand walking and grazing. After the second week, The Sanctuary was called and asked to administer Laser therapy. Each laser therapy consisted of delivering 6000 Joules of energy to the entire wound and surrounding area. Treatments were done for three consecutive days and then every other day for an additional three treatments. 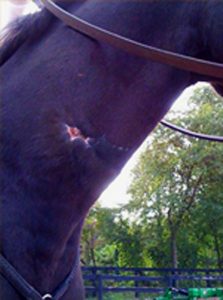 Conclusion: Since the skin flap was thin and cold at the time of suturing, Dr. Rubin felt that most of the flap was going to die and have to be cut off. However, at 2 weeks, only a 3 inch section of the tip of the V was cut off because the skin was not viable. The granulation tissue filled in nicely under the flap, however, the skin edges were still not healing together. After only nine days of administering the laser treatments, the skin edges healed very well. With a total of only 6 laser treatments, Canaan Land was back to full work by the 4th week after his injury. Dr Rubin stated “Overall, the laceration site at 30 days looks amazing. I am very pleased with the results of the laser therapy.”